We interviewed one of the NEOs involved with Coalescence. He’s also one of the masterminds behind the REALMS AT WAR which is running a second huge narrative event later this year, October 27-29, in Cambridge, U.K. And they still have a few spaces remaining! RAW17

How did you become a NEO?

I played Warhammer 40k in my early teens but followed the usual trend by dropping out of the hobby around the age of 16 to play more sports and video games.  Almost 20 years later, I wasn’t playing as much sport as I had previously and I decided that I wanted to start a new hobby.   I have always been a big fan of the sci-fi and fantasy genres so I thought I would have a go at Warhammer Fantasy Battle (WFB).  That was around four and a half years ago and is one of the best decisions of my life!
I was really lucky to meet a group of similarly aged local WFB players who called themselves EATBATS (East Anglian Tabletop Battle And Tournament Squad!) and after they took me to my first tournament, my interest in the hobby soared even more!  I really enjoy playing with people I haven’t played before so I find tournaments or events are so much fun.
A short time before the release of Age of Sigmar (AoS), a narrative event called The Mingvitationals was held in Bristol by Ming Lee and a few of the EATBATS crew, including myself, managed to get places.  It was my first experience at a narrative event and to date, it is still the most enjoyable weekend of hobbying I have ever had!  Non-standard armies everywhere (do you remember the netlisting??), custom made scenarios with hidden secondary objectives and a mix of singles and doubles games!  Awesome fun.
When Age of Sigmar dropped, the majority of EATBATS jumped straight in and we immediately fell in love with it!  The freedom to customise your army opened up so many possibilities to everyone.  For me, this simple change meant that it really felt as though my army was now truly my own and I started to work up a background for it including stories for each of the characters and units.
Another of the EATBATS crew, Mark ‘Mitzy’ Mitzman, had been in contact with Ming about putting on an AoS  narrative event and in late spring in 2016, I joined with Ming, Mitzy and Steve Foote to become EATMingsFoote.  Between us we created the Realms at War ‘Legends’ event (RAW16) which was held in Cambridge in November 2016.
RAW16 was the first narrative event in the UK and our 40 attendees brought their armies plus an Aspirant who, over the course of the weekend, gained new attributes, equipment and skills to eventually become a Legend.  All of the players created custom built minis for both their Aspirant and their Legend which was amazing!  We also encouraged lots of customisation of armies, display boards and a background for each army.
As part of our player pack, we had collated all of the background stories the players had submitted for their armies and bound them into a booklet which we designed as an ancient manuscript. – this was one of my favourite parts of the event, but I suspect that most people would talk about the RAW16 terrain.  There is too much to describe but its safe to say that these were some of the most themed tables ever in the UK scene.  If you’d like to have a look at the tables, please visit http://www.tga.community/forums/topic/6718-realms-at-war-legends-raw16/ 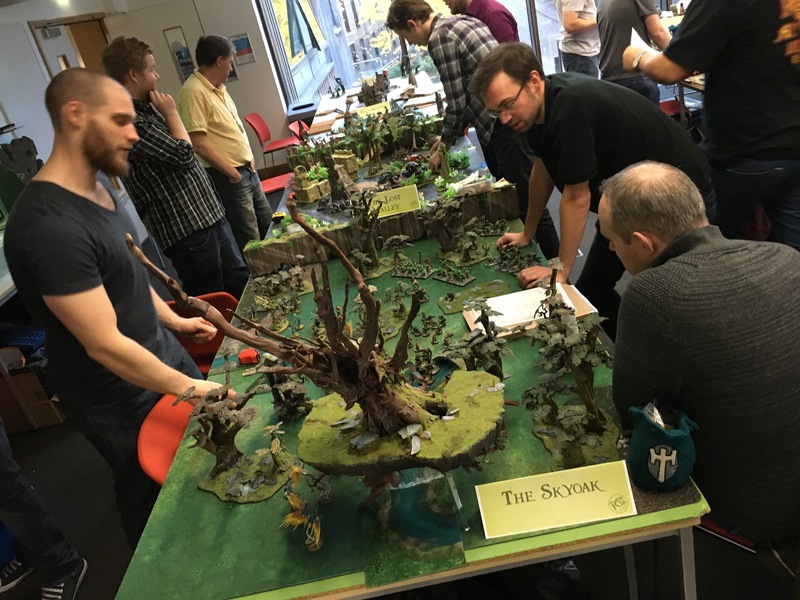