This is the third part of the series exploring the origin of Nehnaxiir, the godbeast which was the featured antagonist in the grand narrative event at NOVA Open 2018; the previous parts are https://wearetheneon.com/category/nehnaxiir/ .

This latest world was truly a curiosity.

It was a realm of mauve skies and with an atmosphere of liquid water. Amplifying the image with his six massive, complex eyes, he determined that a surface of solid matter was not readily visible, though he surmised it existed far below the clouds. The Godbeast waited, just outside the threshhold of their perception, in the space between stars.

He was patient, at the moment Time mattered not. Time was ephemeral, meaningless to him. He had observed this and a thousand other worlds. Some, he had watched for millenia Some, he watched for but a day before they destroyed themselves with the power of harnessed suns.

All of them tortured him in the same way.

He was unable to cross the barrier between their world and the aether. His arcane nature, Nehnaxiir reasoned, would break their world on a magical level, or at the very least, disrupt the physics of that land.

So, in every case, he did the same thing. Nehnaxiir would extend his immense will below him, and seize the mind of an inhabitant. Through them, he would learn and observe vicariously, until either he had learned all he could, or their civilization ended.

Even now, the thirst for knowledge was becoming unbearable. His patience waned. As he drifted in the empty void, his massive eyes shut.

From the serpentine sensory organs on his head, shimmering strands of gray un-light slowly wended their way toward the world below.

He felt a colossal, satisfying shudder as his magic breached the veil. A small jet of gas the color of a bruise vented into the void where his tendrils passed through. They passed lower and lower, from the uppermost layers and down to the strata at which creatures lived. One, an awkward, lanky and avian-esque thing, went rigid as the invisible tendrils penetrated its skull. It had no name, not in any conventional sense. But, it was male. And it was searching for a mate.

A second later, Nehnaxiir opened his eyes. Though now, he was seeing through his proxy’s sight. He debated whether to assert control, or simply sit as a passenger.

He opted for passive observation. The creature shook off and dismissed the initial intrusion. It figured the gods were having a laugh at his expense. Ambitions of reproduction and building a skynest filled its mind.

Nehnaxiir read every thought. A question came to his mind. Where would the creature build a nest in a world with no land?

As if to answer, memories rose to the fore in the bird-thing’s brain. The clouds were so dense, they functioned as stable ground.

Nehnaxiir paused. He was not aware of any wings on his host.

He wondered, how did it fly?

As if in answer, the creature opened his throat wide, and a shrill screech emerged. A moment later, it began to rise in pitch as an airsac on its back inflated.

Far above, Nehnaxiir furrowed his massive brow, and the bird-thing subconsciously did so in kind.

He wondered, how did it propel itself?

The bird-thing took another voluminous breath. Nehnaxiir noted that the airsac remained full, but slits on either side of it’s body widened and expelled the air backward, and his host began to move at great speed.

Before he could inquire about the cloud nests, other members of the host’s species, or the fauna of this reality, Nehnaxiir was ripped from his observations and suddenly found himself back in the void.

He was wary. Nothing had ever interrupted him before.

A painful, violent shiver rocked his body. The tremor began slight, but grew with each passing moment.

Fear was not a native feeling to the Godbeast, but pain was still real enough. He screamed internally, for he had no mouth.

The tremors became full-on seizures. He shuddered horridly. Below, the world was in turmoil. Every living thing was now convulsing in lockstep with him.

The runes and sigils that marked his flesh began to glow. Another convulsion wracked him, worse than the last.

Finally, when he felt his flesh could take no more, there was a massive, bright and potent pulse. It left him and travelled the void. Curiously, it returned a moment later, as if reflected from something distant.

The pain left him. Nehnaxiir looked below.

The entire reality was sterilized. He could tell as much. He probed further, but found no host. Everything was dead. Killed by massive psychic trauma. Not even the simplest organisms survived.

Lamenting the answers he’d never have, the Godbeast turned away from the sphere below, angling toward the nearest star, to begin the long swim.

He froze still when his eyes found it.

A small, luminous, gray strand appeared mere meters from his eyes, and seemed to stretch endlessly, in a completely random direction.

It was alien to the Godbeast, something he’d never seen. And yet …familiar. It was the same hue as the un-light radiating from his sigils.

Without pause, he began to follow the trail. Purpose and certainty filled him. This lead was taking him to rare and extraordinary knowledge. He knew it in his bones.

The Godbeast’s thirst for knowledge spiked at the thought.

The aether, normally colorful and silent, was quaking a dull gray. Pulses of un-light washed over and around hisassive, cetacean body. Dull pain, the consistency of an echo and the volume of a collapsing mountain, wracked his brain.

He had been diving the astral currents for more than a thousand years. Yet, despite his normally burning curiosity, Nehnaxiir remained single-focused. He had a destination, and the certainty of purpose which hadn’t filled him since his days as a mortal.

All ambiguity was burned away. Meandering, century-long detours to worlds unknown were all but forgotten.

All that mattered was finding the end of this trail. He was getting close. He knew it.

Something troubled him deeply, or as much as a Godbeast could understand concern.

They had begun as faint whispers in his mind. Fragments of words. Then full sentences. Then thoughts.

Over time, they had cascaded into open conversations and discussions, exhortations and pleas. Puzzled at first, Nehnaxiir realized soon what he was experiencing.

They were the thoughts and words of an entire civilization. Discordant voices, tinged in every color and flavor he could imagine.

And they were emanating from the same place at which this sojourn would end. The Godbeast was certain of this.

He bristled with anticipation. Though, it was dulled somewhat by another conundrum. Something entirely different. Something far more mystifying to him.

Accompanying the dull pain was a sense of familiarity. it grew ever more intimate the closer he got.

Eventually, pallor gave way to the familiar abyssal black of the aether. Color bled back in – and as the Godbeast came to a slow drift, something magnificent unfolded below him.

A reality. A new realm. Something utterly new to Nehnaxiir.

It was a place of shadows, steeped in constant change and double meanings. Saturated in magic.

Shock coursed through his body. His mind, an immense and depthless thing, reeled. The realm below him was formed from the very stuff of magic.

And not any magic, but sorcery from his own birthworld. Ulgu. The wind of Shadow, now coalesced into a physical plane.

It was right below him, hung in the firmament like a curio in a galactic archive.

He examined the realm more closely. It was nearly impossible to see through the veil, so obscured was this place. Fitting, he thought.

Something called to him. The source of the pain! He scoured the realm, looking for anything that would emit such energy.

And there, in a far corner of the plane, halfway to the realm’s edge, he found it.

A place where he could see clearly past the veil to ground below. An anomaly. It was a fragment of certainty in a hillock of transience.

He saw swamps and plains. An ocean. Mountains. Forests. Jungles.

He recognized some of the denizens from his time in Nehekhara, while others appeared entirely new. Try as he might, though, he could not reach their minds from above the plane. This confounded him. He probed further.

For the third time, shock wracked his mind.

There, glowing in fierce gray un-light to his arcane eyes, was the source of the painful pulses.

Ley lines and deposits of something glowed throughout the region, the edge of which seemed to begin where the nodes of power ended.

The glyphs on his sides glowed, and tendrils of power drifted from his body to the veil below. As he watched, he realized with dawning clarity what these nodes of energy were.

His reagent. Crafted in another life, for another purpose. Somehow, it had been subsumed by the wind of Shadow when his world was ended.

It had reformed here. And, he surmised, it was granting this region the stability that evaded the rest of the realm.

Nehnaxiir could restrain his curiosity no longer. He had to know the mysteries of this realm.

He prepared to extend his tendrils of influnece, but paused.

He came to a decision. The Godbeast focused his energies with those of the reagent below.

His body and the veil between Ulgu and the aether began to resonate with energy. Using magics from another lifetime, the Godbeast began to chant wordlessly.

Below, the veil shimmered and began to fade. A vent of gas escaped into the space between worlds. He angled himself toward the gap in the sky, and passed through.

With a wave of emotions, facts, and memories, Nehnxaiir emerged into the blue skies of The Dawnland…to the terror, joy, trepidation and wonder of those below. 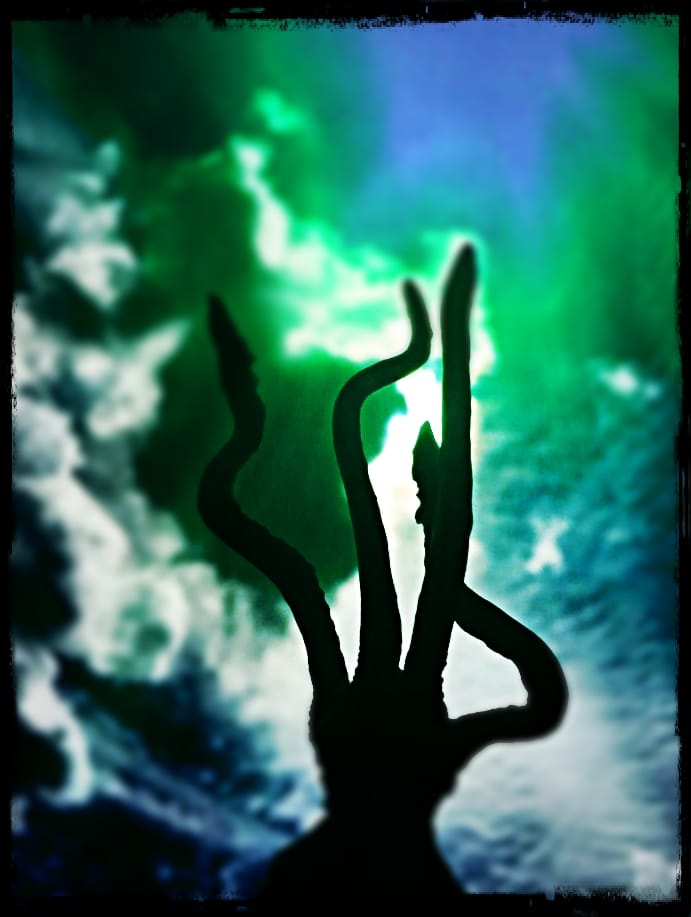