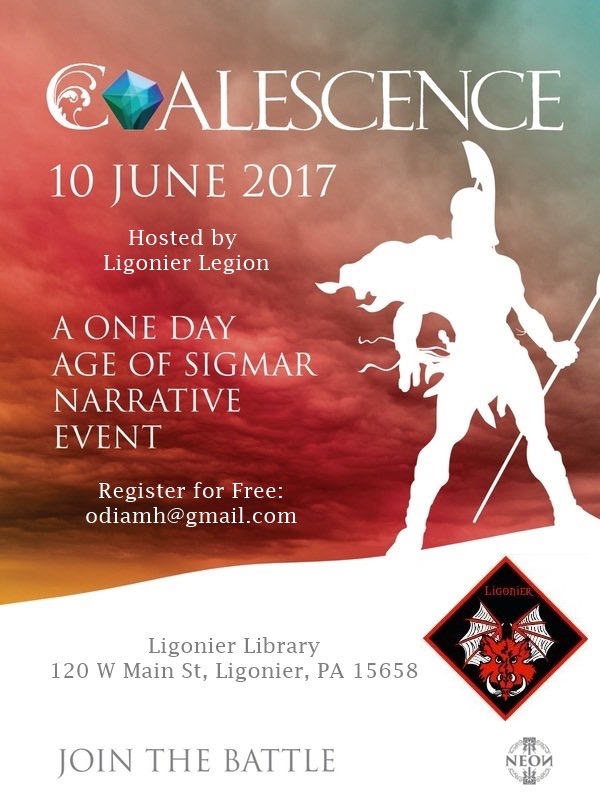 A Coalescence Retrospective: Part I

After Coalescence, we documented victory reports from 45 different events around the globe. We also saw many great pictures of miniatures on some awesome tabletops, and we read some after action reports, posted on Facebook, Twitter, and other blogs. In the next few weeks, we would like to share some of those here on the blog as a way of documenting some of the events all together in one location.

Today we start with a report from Matt. Take it away, Matt!

Matt: Coalescence was 3 matches. Match 1 was a 1500 point battle, Match 2 was 1000 points and Match 3 was 500 points. Each army list had to be comprised only by removing units from the previous list. So, for me, I started with Fyreslayers and Kharadron Overlords. After Match 1, most of the Kharadron were dropped from my list. And then going into Match 3, some Fyreslayer units were dropped and other units were thinned.

So, the overall story featured the Diaphanous Fastness, an extremely powerful magic crystal, and armies of the Grand Alliances gathered and fought to control it. In my local event, run by Chuck Moore (@odiamh), he added some personal flare by adding Teclis and Tyrion behind the scenes pulling the strings. The story behind my army is that my Kharadron Overlords are a group of Duardin that recently separated from the Barak Thryng Skyport with a small clan of Fyreslayers to make claim under a mountain like their ancestors. Set aboard the Arkanaut Frigate, The Sky Forge, they disembarked. Along the way, Aether-Khemist, Doktor Began, detected the Diaphanous Fastness, and determined he would be able to implement the crystal into their aether-gold technology. His ally Runefather Mjortic agreed to go after the crystal. 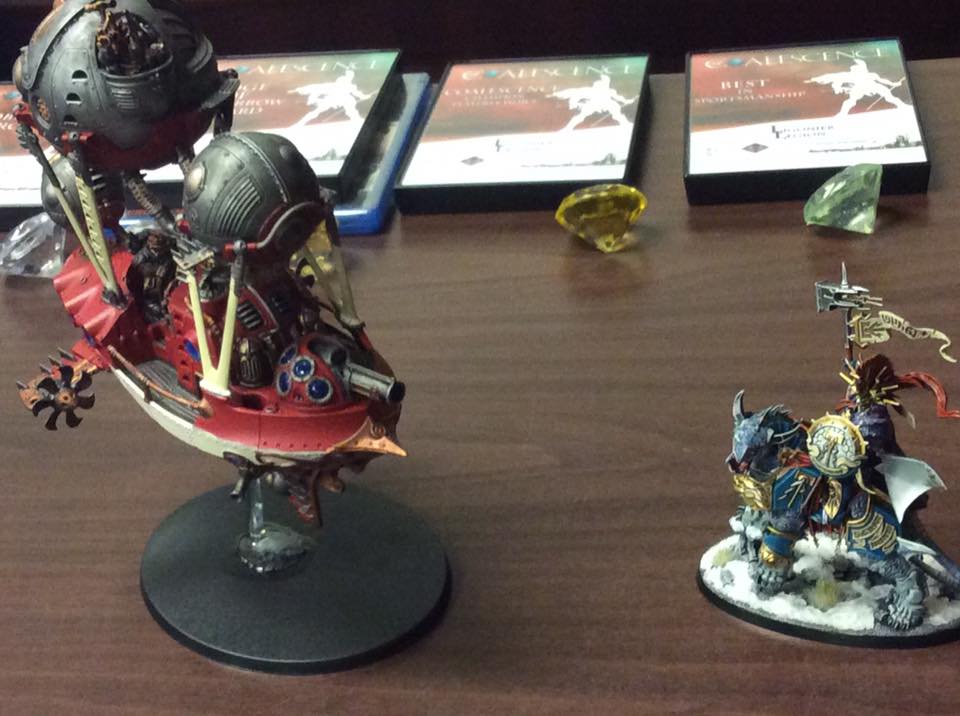 Match 1, each player took the average speed of their units. The slower player was the runner and the faster player was the chaser. The Runner set up their units 12” – 24” from one table edge, and then the Chaser sets up their units up to 12” from the same table edge, 9” from the opponent’s units. The Runner’s goal was to get 1/3 of their total models to the other table edge, and the Chaser’s goal was to stop them. Additionally, every match had secondary goals such as slaying a Monster with a non-Monster hero, and the like. So, even if you didn’t win the primary objective, you could still get more points than your opponent.

So, for my first match, The Sky Forge started to set down far enough away from the crystal that they should be able to disembark undetected, get in, and get out. However, as soon as they landed, filthy Moon Clan scrambled out of the nearby woods. The Fyreslayers knew their duty, and the Runefather took the charge. The Sky Forge needed protected at all cost. Even though all these Duardin grew up on the Skyport, they could feel ancient grudges boiling up in their blood. Not only did they successfully defend the Sky Forge, but they slew many Grots.

Despite the massive casualties caused, every Duardin lost rang deep in the survivors’ spirit. They needed to set up a forward base of operations, get their bearings, and bind their wounds. However, it looked like someone else had their eyes on the same grounds…

Match 2, each player needed to move their units onto a terrain feature and mark their claim by rolling a 3+. At the end of 5 rounds, whoever had the most terrain claimed won.

After finding a good landing zone for the Sky Forge, they were suddenly ambushed by a band of Khorne Bloodbound. The Sky Forge had enough time to escape, but a brave unit of Sky Wardens stayed behind to help Runefather Mjortic and his Duardin. As hard as the Duardin fought, the Bloodbound’s lack of fear of death, and love of pain and blood, proved too much. The Fyreslayers slew many, but were unable to push the madmen back. They had no choice but to accept their routing, and escape with the remaining few they had left.

Runefather Mjortic’s long time friend, Toskyr, a Grimwrath Berserker, and one of the few survivors, was able to help them navigate through the arcane landscape. Finally, they saw the crystal! What they had paid such a price to acquire! Only meters away! As they approached, thunderclouds gathered, and thunder and lightning appeared out of nowhere. A giant lightning bolt struck the land in front of them, momentarily blinding them. When the Duardin’s eyes refocused, Sigmar’s golden soldiers stood between them and the crystal. Without even acknowledging the Duardin’s presence, the Stormcast began excavating the Diaphanous Fastness from the earth. This could not be tolerated! They fought for this crystal! They died for this crystal! It was theirs by rite, alone! Mjortic and all his men felt unknown fervor boil up in them. Only a few words were spit before the Fyreslayers began throwing axes at the celestial interlopers.

However, in the end, they were too fatigued, too hungry, too wounded… too few. The Stormcast showed mercy in their assault, making sure not to hurt any Duardin more then needed. The Stormcast incapacitated every single member down to the last Duardin. They finished digging up the crystal, apologized, and went on their way. This apology only fueled the grudge-bearing heart of the Duardin even more. A Kharadron scouting party found the remaining Fyreslayers and were able to escort them back to the rendezvous. Stormcast… Bloodbound… let the Book of Grudges begin anew.

So, as you can see, a narrative event is simply playing Age of Sigmar with less concern for winning, and instead forging the narrative! What you read above is a little story I made up to go along with my games, and I just made it for myself. I didn’t do it for points, or or anything like that. I’m sure some people didn’t come up with stories, and backgrounds for the armies and their matches; and that’s just fine, too. However, I hope you try out our next event! This is my Coalescence story… what’s yours?

One thought on “A Coalescence Retrospective: Part I”