One of the 45 locations reporting results for Coalescence 2017 was an event in Blacksburg, Virginia. The NEO for this event, Duncan, provided an overview as well as some unique documents from their event.

Duncan: It took place in Gyran, in our traditional campaign setting, the Vale of Efengie (named for the store Fun’N’Games).  It has a pretty tongue-in-cheek map that mirrors the store’s layout, so Mount Koula is a boiling soda volcano that resides in a similar location to the store’s drink refrigerator (I’ve attached a map at the bottom for your amusement).  Anyhow, here goes:

“Long ago, a powerful ring was forged in the boiling depths of Mount Koula.  Socketed in its truesilver band, surrounded by lesser gems and runic inscriptions, is a single glowing shard… a keystone shard.

“The Ring of Power has changed hands many times, adorning many lords of the vale, and has more than once fallen into myth only to turn up again in some grifter’s pocket or in a beast’s trove.  The inlaid shard has begun to glow more brightly than before.  Who will control its power when the Coalescence comes?”

I like to make campaign books, so here are the pages I made for our Coalescence event (the first spread and last spread include the official intro and outro fluff).  Basically, we had 4 Order armies (Kharadrons, Fyreslayers, Stormcasts, and a Stormcasts & Dwarf alliance), 2 Destruction (Ogors and Bonesplitterz), 1 Flesh-Eater Courts, and 1 Bloodbound.  The Kharadrons were the only army to win in Round 1.  After that, Order cleaned up pretty well.  One funny thing we ended up doing was we avoided having two Underdog Grand Alliances by combining Flesh-Eaters and Bloodbound into Grand Alliance Cannibals; they didn’t get far though.  All of the pictures used on these pages are from the event.

The fluff snippets spread was created from stories submitted by my players to earn a special narrative “Triumph” card to use in the event.  Every single player submitted something, which I was pretty enthused by.  Sadly, one player submitted their story (the Skarbrand one), but then had to babysit and couldn’t attend.

This is just a basic run-down of what transpired in the simplest terms.

Last spread is the ending story as posted and with an added little bit of fluff about the Vale of Efengie specific outcomes. 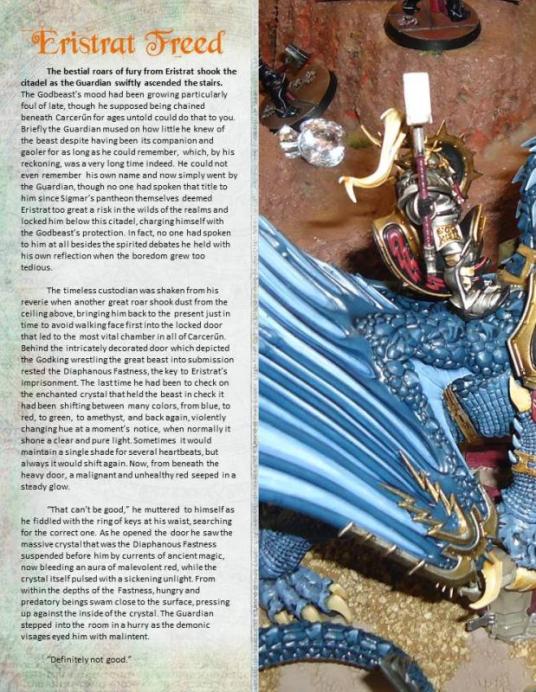 Here’s the ending piece I wrote to mix the outcome of our event with the outcome of the global event.  I’ve got a running narrative in the monthly events I host, so I wanted to weave it all together.

“Lord Celestant Tulkas held the ring, now diminished to its normal size, but still glowing bright with Sigmar’s holy light, in the palm of his hand.

“We should lock it away, take it to Sigmar’s vaults in Azyrheim”, said Cnut.

“It will do him no good there”, Tulkas replied; “It has been purified, and if you do not wish its strength, I will gladly bear it.”  He slid the ring onto his finger and felt its magic ripple over his body, shrouding him in one more enchantment.  Somewhere very far away, Eristrat turned, sensing one of its captors, and began the long path to vengeance.”

One thought on “A Coalescence Retrospective: Part III”