The online narrative submissions campaign is back!

Play some games, paint some models and write some stories, to decide the fate of the beleaguered survivors of Beaconhill!

The Act 3 of Shadowmarsh is here!

Run by NEO and narrative hobbyist jack-of-all trades Ricki Smith (@KitbashedGaming), of KitBashed and Artisans of Sigmar, Shadowmarsh is a worldwide narrative Age of Sigmar campaign running on Twitter, where player submissions decide the course of the plot!

The first two Acts of the campaign took place earlier this year (Dec 2020 – Jan2021).
In Act I and II, set in the Shadowmarsh in Ulgu and following in the wake of the Broken Realms storyline, we saw the beleaguered city of Beaconhill (an outpost of former-Anvilgard just a realmgate away) fall prey to Morathi’s plots and multiple threats from the swamplands. And this was before the Kruleboyz! 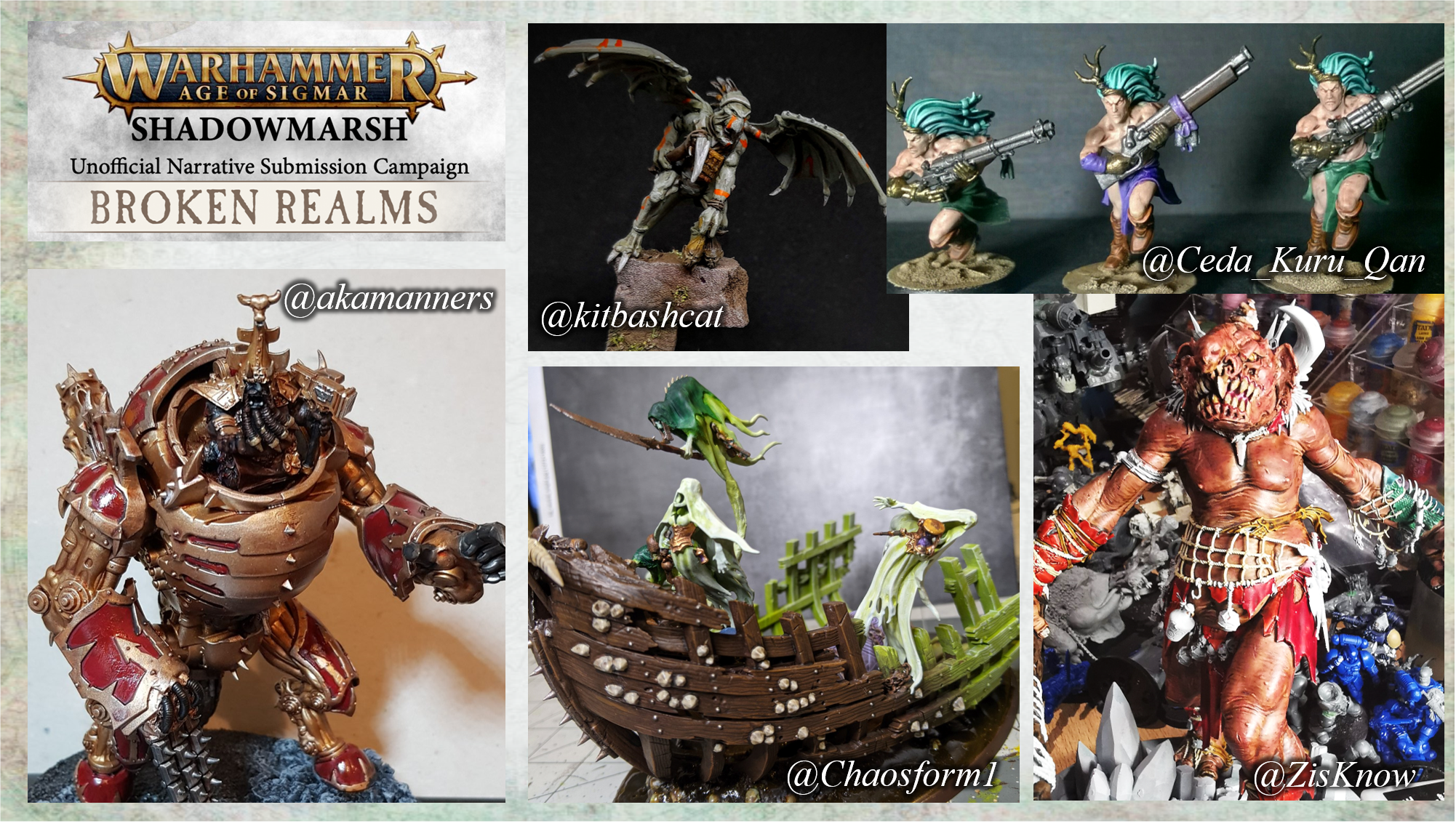 The city fell: taken over by the forces of Chaos who claimed a gestating spider-godbeastling for their own… the survivors escaped, thanks to the efforts of Jakob Bugmansson himself, taken through secret tunnels and away from the devastation…
You can find the setting information for Acts I and II here, and catch up on the story by scrolling down the #AoSshadowmarsh hashtag.

We, the players at home, had a lot of fun creating new armies, characters and storylines within the Shadowmarsh campaign, and some of those even spun off into other campaigns of their own later on.
And now, the story continues…

Shadowmarsh Act III – Outcasts opens with the myriad survivors of the Shadowmarsh having crossed a realmgate to the Valley of the Ironking in Chamon, a bleak place with little to sustain them… who will they turn to for help?

You can participate by posting your submissions on Twitter, and include the hashtag #AoSshadowmarsh as well as listing the Narrative Path you wish to support.
Each turn lasts one week.

Remember, you can submit game results, hobbied models or written narratives!
The more votes a Path gets the more the story will veer in that direction, and the more your forces will tempt the Outcasts to their side!
Turn 1 has already started, and closes this coming Saturday October 2nd. You can see some results coming in already:

Who will the Outcasts turn to to solve their situation?

To Sigmar’s faithful, who eke out a miserable existence?
Reject the Gods and forge their own path through science?
Submit to the bestial Lords of the Night for safety?
Or join the savage tribes and clans, and take what is rightfully theirs?

What will YOU choose?

The campaign lasts until October 23rd. Check for more details on the official event page.
Hope to see you on Twitter!

Many thanks to Ricki Smith for continuing to run this campaign, as it is a highlight of amazing hobby and storytelling.
You can follow Ricki on Twitter @KitbashedGaming, contribute to the kitbash/conversions community on his website KitBashed, or check out his rules design and hobby projects on Artisans of Sigmar blog.