A new 1-day narrative event will take place at the Golden Nugget hotel and casino, in Las Vegas, Nevada USA, on the 5th November 2021!

This narrative event will be a war between 3 ambitious kingdoms, on an interactive map of the Dauntless Divide itself, a small continent set in the Realm of Fire.
The 3 Empires have kept to the words of a peace treaty so far, but only on the surface. It hasn’t stopped them from each raising armies of their own and preparing for a grand campaign at the Treaty’s expiration.
This narrative event is part of the Wasteland Games Weekend.

We chatted with the lead NEO for the event, Anthony Croupe, about what players can expect from this event.
During the past year, Anthony and fellow conspirator Naro Hewitt have powered up an entire narrative Age of Sigmar scene in Las Vegas USA, and made us all jealous.

Q: Please summarize the event for us, Anthony, and what players can expect.

A: Players will be immediately thrown into a conflict between three Rival Empires, all vying for control of the region of the Dauntless Divide. Where once a fragile peace treaty kept the three at bay, at its expiration all of our empires put their plan for domination into action.
As a player, you will assume the role of a General in one of the three nations and alongside your fellow Empire allies do your best to defend your territories from the enemy empires as well as do your best to successfully attack and claim regions for your empire’s gain.

Players will come ready for battle with 2 lists of 1250 Points (one for Attack Missions and one for Defense). They can be as similar or different as they would like, however they must be from the same battletome.
Besides just fighting for your empire on the battlefield, you will be tasked with personal missions to try and complete during each campaign round, as well as make progress towards each empire’s personal secondary objective. The completion of these tasks could lead to larger bonuses for not just your empire but your own personal glory as well.
With a player elected Commander, who will decide where to station players on an expanded map for all to see, customized battlefields based on the map, as well as trying to survive the NEO’s Hand of Mayhem every d66 minutes, players will have their hands full in what is planned to be an annual narrative event out in Las Vegas for years to come!

Q: What Narrative innovations and special rules will you be deploying in this event? We know you’ve experimented with introducing many novel special rules to your gaming group.

A: I’ve always been a big fan of sprinkling in a few extra rules to add flavor to factions, artefacts, and just general allegiances for our players to enjoy in our other local narrative events and 3 Empires is no different.
Each empire will have a special once per game ability that they can use that can definitely change the flow on the battlefield, as well as can help contribute towards each empire’s secondary objective. And I already mentioned above the NEO’s Hand of Mayhem that will happen every d66 minutes… well players will just have to check the pack for more information on that and be prepared to brace for these at the event. 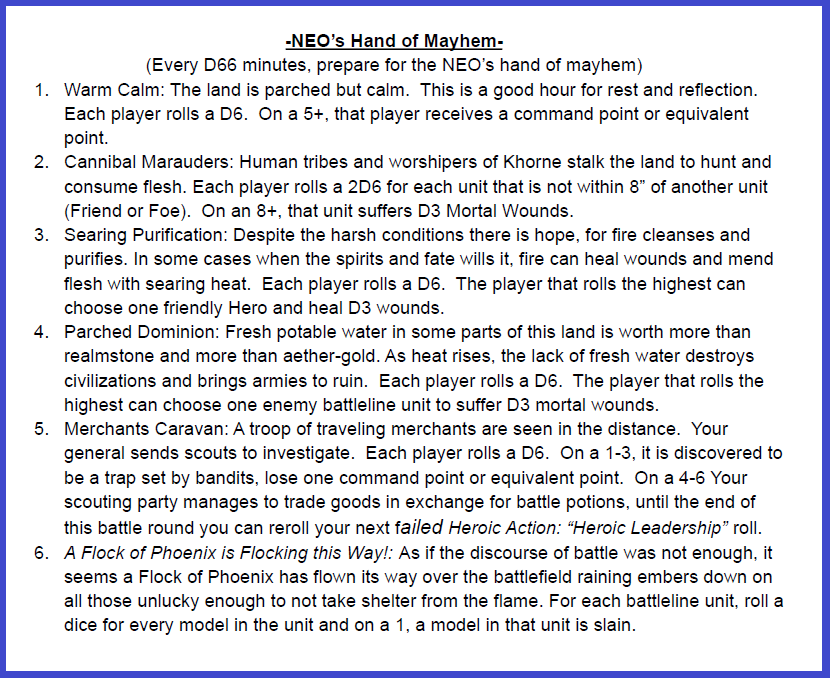 Q: How will these territory conquest mechanics going to be represented during the event, on the map?

A: Each campaign round every empire will have 2 territories that they will be contesting. Some rounds may see your empire completely on the offensive, fully defending a pair of territories, or perhaps a mixture of both. Each territory on the map offers a special passive bonus to the empire that controls it and at the start of each Campaign round, players will be able to pick one of the bonuses to benefit their army for that game.
On the surface, each round may look to be a simple Attacker vs. Defender to see who claims victory at each territory, but those are not the only conditions that will decide the champion each round. All those secret missions players are tasked with, as well as secondary objectives, will have a part to play in deciding the outcome.

Q: What kind of team dynamics and strategic actions will players be able to experience? Will there be betrayals and backstabbing?

A: When players arrive for the event, they will be assigned to one of the three factions. If one of the factions really calls to you, I recommend arriving early and being the first to register as players will be placed into factions based on the number we have to keep things balanced.
After players are split into their empires respectively, they will be able to gather into a group and vote on which player will be their Commander for the event. Now The Commander has a very important job. With weather conditions affecting the various parts of The Dauntless Divide, as well as making decisions on which forces should be sent to attack territory and which shall hold fast and defend, they will definitely have their hands full… of course with advisement and assistance from their fellow generals as it should be in a War Room.
And although there is no betrayal or backstabbing happening during the course of this year’s 3 Empires, whose to say that a couple of mechanics along these lines couldn’t be found in future year events.

Q: We know you are part of a community of Age of Sigmar players who are very engaged in the Matched Play scene. You decided to branch them out, en masse, into Narrative Play.
What made you decide that, and what strategies did you use to motivate them?

A: Its no secret that our players love matched play and beyond that tournament play in general. Now I can’t deny that I don’t love playing in those tournaments myself, especially with this season our ITC team doing very well. BUT… when you spend your time attending a tournament every month or two, do you really need more of that in your down time? Now some players may say yes and think that they should only play this way, but if our community out here in Vegas can attest that is not quite the case.
I know many fear Narrative Play, thinking that means no points, no real objectives, and perhaps a ton of book keeping match-to-match as well a lore book for your force 20 pages long. Of course we all know better that this isn’t always the case. So out here, was the secret of just sprinkling a few battle plans here or there, or having players dabble in a little triumph and treachery and such. And from there, just hosting events and really showing players that Narrative play can just be another form of matched play with much more interesting objectives and stakes than just who may have more points in the end.
So if it worked for our Vegas community, we just need to branch it out and show the rest that Narrative is not a big scary beast to be afraid of. Its just a fantastic alternative to the standard tournament format that we are all so accustomed to.

Q: What would you like to say to players out there, to motivate them to come to ‘3 Empires’, or join you all in future Narrative Events in Las Vegas?

A: If you are looking for a great step into the world of Narrative play that isn’t super daunting or just want to try something that isn’t the standard 2k ITC style, then come over to the Dauntless Divide and join us for 3 Empires.
This event is open to newer players as well as veterans of the hobby alike and I can assure that it will just be a great way to spend your time. And the fact that it is a 1 day event is even more of a reason to not be afraid and try your hands at Narrative. Who knows, maybe we will make a future NEO out of you? Take a peek at our event page (below) and we will see you November 5th.

Also let me be the first to share our glorious event pack with you all: Event Pack_ 3 Empires_ Wasteland Warfare.pdf

This sounds awesome, Anthony! Thank you.

You can find the Event Rules page here for more details and tickets.
You can also get in touch with Anthony and Naro at the Las Vegas AoS Facebook group!

There are still tickets available, grab yours before it’s too late!!!
And if they happen to be all taken, sign up for the waitlist: there are always dropouts! (true story)
What do you think about this event?
Do you have any questions for the NEOs, and how they put together such a big group of narrative players?
Leave your comments below!