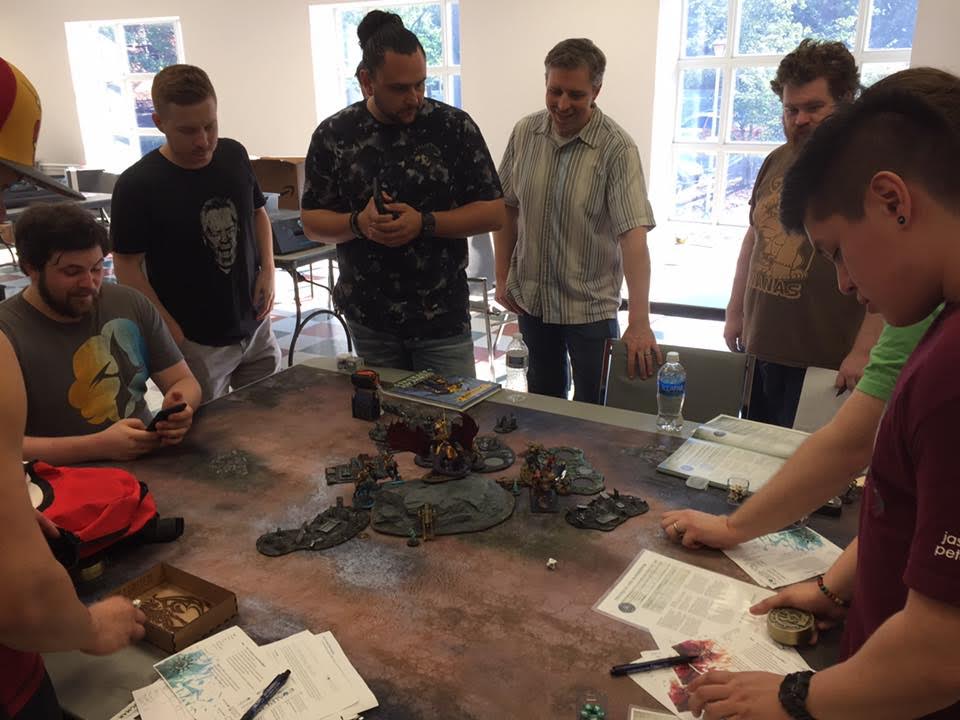 One of the 45 locations reporting results for Coalescence 2017 was an event in Northern Virginia which actually covered 2 days of games in 2 different locations. Enjoy this report with pictures put together and submitted by Brian! 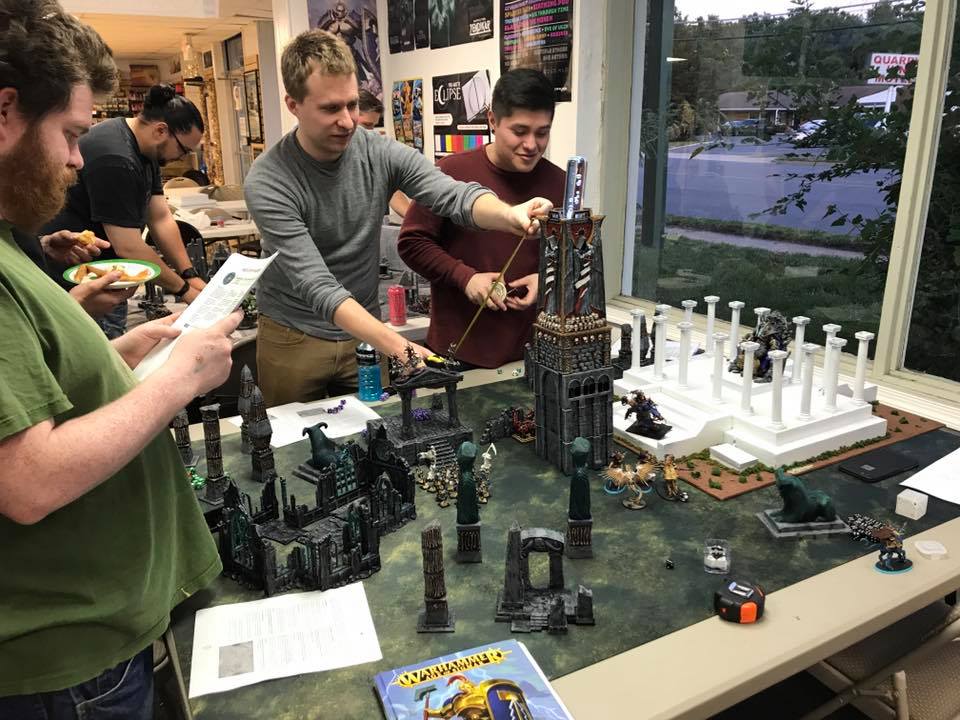 I was very excited to get the chance to help run Coalescence in Falls Church, Virginia. We’ve got a growing AoS community, and we’ve seen a lot of new players come to our club in 2017, myself included! Participating in Coalescence was a good way to try and import a style of gaming that we’d only read about in reports from RAW or Holy Wars. In our area, we live in the shadow of the NOVA tournament, which turns us all very competitive as the summer draws to a close. Coalescence was a refreshing counterpoint that looks to be pushing us ever towards more story-centric grounds.

We ran our event over two days, because as robust as our community is, we’re not blessed with ample playing space. We ended up running our games starting late Saturday, then stretching into Sunday afternoon in a different venue. This was a lot of scenery hauling but it left us space for narrative to grow and thrive, and let us play out the whole pack!

In the initial release from the NEOs, we learned that individual events were to represent their geographic home areas in the shard-housing centerpieces, and thus bring our homes onto the game boards. This was a brilliant touch by the NEO central body, and laying claim to the city of Washington gave us license to co-opt some extremely evocative terrain! Minutes after reading the first pack I was planning boards. A Washington Monument piece would be perfect to house our local crystal shard. The National Zoo and the National Cemetery were also gameboards waiting to happen. It was quickly obvious that we needed to represent our home as sections of Shyish, the Realm of Death. Once we had this vision of a skeletal mirror held up to the white marble buildings we commute through, everything fell into place.

I built scenery for six tables, and tried to think about a fantastic element for each that would define the game as something different from a normal game. In design, I committed to staying out of play and writing Times of War that worked best with an active party to administer. That gave us:

As I was building terrain, I stood up a Wiki for our club, with the immediate purpose of hosting the background of our locales, but also for giving the players a place to post their narratives. I didn’t want to have their stories as a private share between me and them, but they aren’t TGA/Twitter people! They’re also not Wiki people, it turns out; almost nobody posted until the last 24 hours before the game, and at that point I was packing boxes and making printouts, I still haven’t read half the fluff. I still put stock in this as a resource though; next year we charge ever forward!

On Saturday, we started with ten players on the first, 1500 point mission. We quickly were joined by an 11th, Ben (who after this agreed to serve as my partner in crime for future events); he had been signed up, then dropped out, then finally showed without an army. I gave him my Vampire Lord on Zombie Dragon model and asked him to be a leveling agent in the games… mainly preventing battles from ending too early. He was game, and commenced on a series of cross-table shenanigans that left key pieces across four tables ground into the dust! This was when I knew that our group was onboard with anything that Lady Narrative would demand… when a player lost his general to Ben’s random vampiring and took it with a smile, it was obvious that everyone was in the right frame of mind! 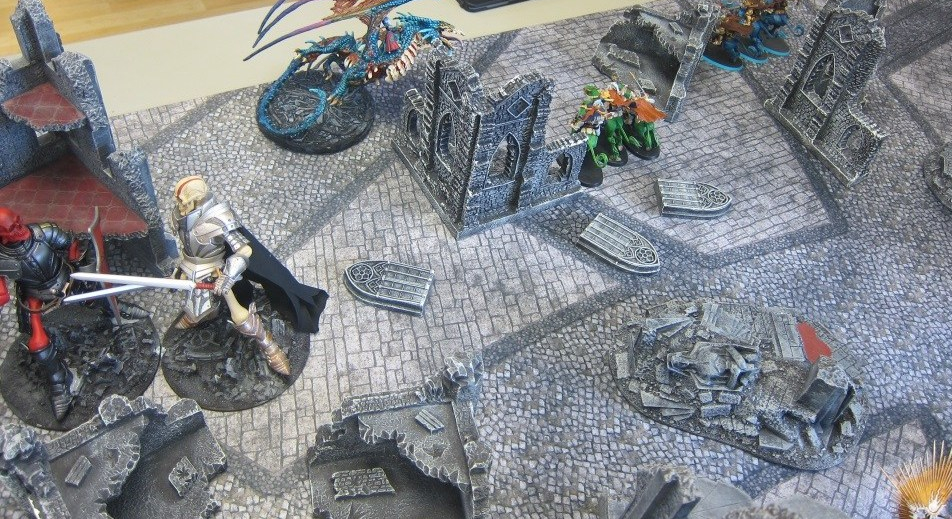 We also introduced cross table play. This isn’t new tech, RAW had quasi-tables without boundaries and Holy Wars had realmgates aplenty. But I will never forget the lights turning on in our players eyes when I told them they could walk or fly units onto other boards. In our narrative, we were all fighting in different neighborhoods in the same city, and the NEO suggestion of mapping our locale to the Realms paid off brilliantly. We had a lot of trading units as the games progressed, and I wouldn’t want to run narrative events without this. I remember working it out with an Ironjawz player, saying something like, “Okay, you’re fighting in Arlington, but now you’re going to Destruction Move rampage across the Key Bridge and end up over on that table in Georgetown. Cool?”

We ran Coalescence Battleplan 1 starting in the late afternoon on June 10, and ground it out over the next two hours, with lots of Alliance-assisting shenanigans and board hopping. As games finished up we collected the combatants to run two quick Battleplan 3s before the store closed, with four-part monster mashes commencing around the Monuments and the Great Humour Falls. Victory Comics is our home turf and doesn’t always give us room to breathe (it’s been hard to play 2000 points with a 9:00 closing time) but that night they were absolutely incredible hosts!

We reconvened the next day in the afternoon at the Falls Church Community Center. We only had this space for four hours, including setup and teardown time, but Night 1 had been good to us. If we could play Battleplan 2 and run a few stragglers through Battleplan 3, all the players would have their points. We lost a player and gained three more for a full slate of 12.

It was also an honor and a privilege to donate terrain to the noble cause that is Kidshammer, run in the same room. I’ve been playing Warhammer since I was the age of these kids, and it would be cool if they enjoyed gaming alongside the rest of us, bent over Dorian Gray portrait versions that we are! 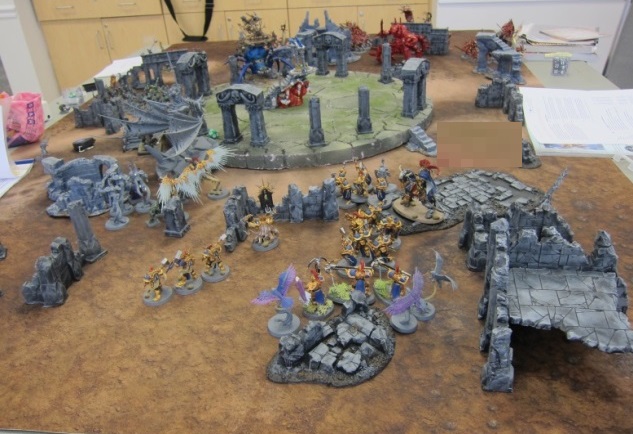 Removed from the crazy chases or skirmish multiplayer of the other scenarios, Battleplan 2 felt like an honest scrap and gave us our best moments. I also fine-tuned the Times of War based on what I had seen the previous day (I was rolling NEO style and had done zero playtesting…I didn’t even really have room to set up my boards before the 10th!). In the deserts, the giant skeletal dog moved faster and got a great stomp in on Sergio’s zombies. In the gothic ruins, a Carnosaur and a Stardrake got locked in combat early on and traded blows for the whole game while the giant skeletal duelists moved ever closer; by turn 5 all four bases collided! Ironjawz ran across the ichor floodplane at Palladors while a Lord Relictor watched from atop the falls, hidden and taking the better part of valor. Stormfiends marched across the monuments and set a Seraphon host alight. Drycha scaled buildings in the remains of the zoo while an animated mastodon trampled skeletons. 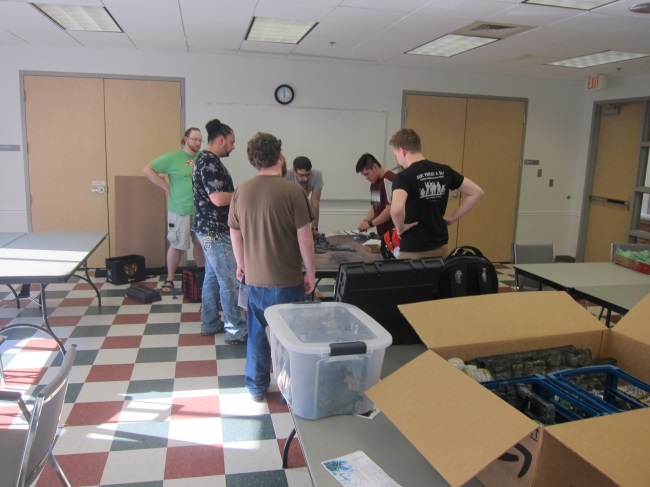 We were packing scenery as the final game played out and we had no time for wrap-up as the Community Center closed. Luckily nearly everyone was free to reconvene for our Awards Ceremony at the Mad Fox brewpub down the street. I had a table reserved and we quickly dove into Warhammer talk. I had made certificates (printouts glued to cardstock, nothing fancy) for Coolest Army, Monster Hunter, etc., and we combined them with prizes from NOVA goodie bags of years past. It was a great moment for our community, the kind of coming together that we never got the chance to do on a normal club night (when the after-event is standing around a parking lot with your case in your hands).

After Coalescence we had tables full of Shyish terrain, and we’ve had some positively littered skirmish tables! But more importantly our WhatsApp group is singing with new members that either found us through the event or took the opportunity to make the leap and play AoS for real. We’re a bit exhausted from it all but are excited to move forward and one-up ourselves. We’re also really grateful that Coalescence was organized at the worldwide level to give us a reason to do all this and have a hand in something bigger than our community. 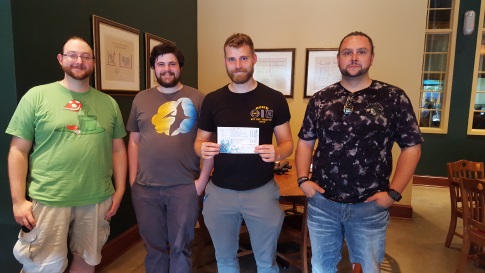 One thought on “A Coalescence Restrospective: Part IV”