So, You Want to Run Coalescence: Malign Portents

Brian Orban returns with another article with advice from his experience running Coalescence last year for his local club in Falls Church, VA.
.
There’s a global narrative event coming up, a unique collaboration between the Narrative Event Organiser’s Network and Games Workshop. On March 17th, the Age of Sigmar community is invited to take part in Coalescence: Malign Portents, a day of narrative gaming that uses material written by the fan community but drawing on the themes of the Games Workshop product. As I write this, March 17th is a month and a half away, and I’m getting prepared. I don’t have as much information as I would like to have… in this way, it kind of reminds me of the lead up to Coalescence 2017. But when I consider what I do know, and the perspective on narrative gaming in general, Coalescence events in particular, I think I have enough to use my limited preparation time wisely. I’m writing this to try to pass this on to the NEO community, those of you that have signed up to run the event in March, and those of you on the fence, perhaps because you’re waiting for more.
So CoMP (I’m making that happen). What can you do to get ready for it?

The Games As We Know Them

First of all, you should know that the details of the games aren’t yet finalized, but will follow this general idea:
Once I heard that because

, I knew a really important detail: what to tell my players to bring. So use this in your communication: three army lists, 1000-1500 points.
If you’re interested in running an event, register here to get on the mailing list and be one of the first to receive the event pack. If you’ve already registered, you’ll receive an email soon.

You’ll need a space, tables, terrain, everything. We’ve written a good deal about this over the past year, and it’s all valid. I might suggest including Jake Castro’s recent article

Advice for first-time NEOs with it’s central point about knowing your limitations. This is to say, if you’re starting now and have 45 days to prep, consider a 4-table event instead of a 12-tables, rent-a-hall spectacular. I’m trying to do things right this year… in June, when we run Desolation of Eristrat. March is my warmup lap and I’m okay with an intimate day of gaming.

We’ll soon have the Player’s Pack in hand that will tell us how our event will work with Malign Portents. But we’re paying attention to the state of the game and we can figure a lot of this stuff out. For instance:

Once you’ve thought about everything that a day of Malign Portents gaming and storytelling can be, has it sparked any ideas? Have any of the stories from the website gotten you thinking about what kind of battleplans or times of War would represent it on the tabletop? How about other recent stuff, like the Shadespire background or the Maggotkin Battletome? If you have a good idea for a game, and you’re wondering whether or not it will work with the pack once It’s out, let me help: the answer is Yes. 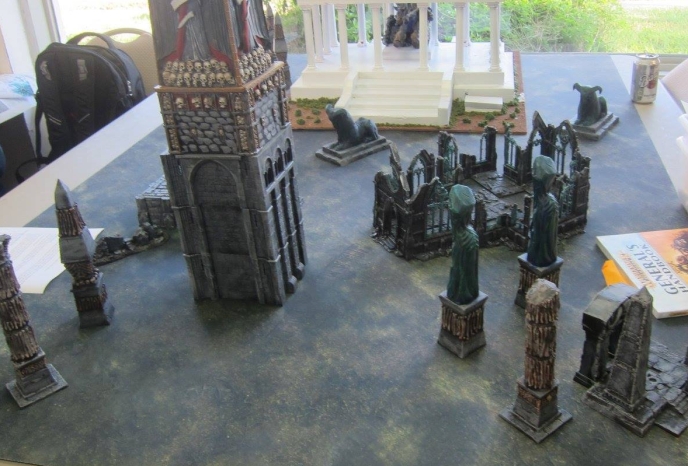 that you will soon receive from the NEO Network. Everything works. The pack that you get will be good ideas from local game organizers doing the same essential job you’re doing. They’re not empowered by a significantly greater amount of experience, and their product isn’t a meticulously crafted, finely tuned mechanism that’s been playtested against every possible list combination. It is good work because it comes from passionate people. But you are passionate about this too!

If you have an idea for your event, especially an idea that will benefit from the extra time spent working on it (playtesting, making unique terrain, or just more cycles to mentally turn it over), just move forward with it. Never worry that your event will be poorer for ejecting part of the pack. It won’t be. It will be poorer if you feel constrained, or if you try to push through hard limitations on time/space/players to make the pack work. Coalescence has one central goal, and that’s to assist with the process of running a narrative event. The moment it’s no longer doing this, discard that part of It, make your own replacement, and never wonder if you’d be going against the desires of the organizers. This personalization of your event is exactly in line with their guiding principles.

What kind of change might make sense for your event? The answer is up to you, of course, but strictly as an example, you might replace one of the battleplans with some kind of Skirmish game. I’m inferring from the point values that the

games are relatively straightforward light battles that explore some exciting elements of the Malign Portents book. Going Skirmish instead would make games run faster and focus attention squarely on the army’s general. It might also let you play with different ideas like quasi-dungeon crawls in Shadespire or other locals. If you’re excited by ideas like this don’t hesitate to run with them now and do the necessary prep-work… you’ll be free to make the decision later with the release of the full pack.

In the hopes that it might be elucidating, I offer a record of the work I’ve done in the past month, since CoMP was announced, and my plans for the next month and a half. Use this as a checklist of the elements you should consider in getting ready for your own event. If you’re doing something else, let me know, I should probably get on that too!

Now We Play the Waiting Game

The Coalescence: Malign Portents event is really exciting because it builds off an official product. But it’s clear that we’re waiting on that product before we can get the detailed information for our Coalescence event. It’s natural to feel a lack of control, and if that’s the case, take that control back! You’ve always known everything you really needed to run this, and you’re quite able to retrofit whatever “Malign Portents” means into your vision to make right on what might be seen as an agreement with your players. At this stage, just get ready to run some good Warhammer and the rest is going to fall into place.
We want to talk to you about Coalescence! If you’re a player, let us do our best to find you a local event! If you’re a NEO, let us give advice or match you up with another NEO to share ideas. Please feel free to reach out to us at https://wearetheneon.com/contact/
Or check out the Facebook group at AoS NEON.
.
Thanks, Brian!

One thought on “So, You Want to Run Coalescence: Malign Portents”