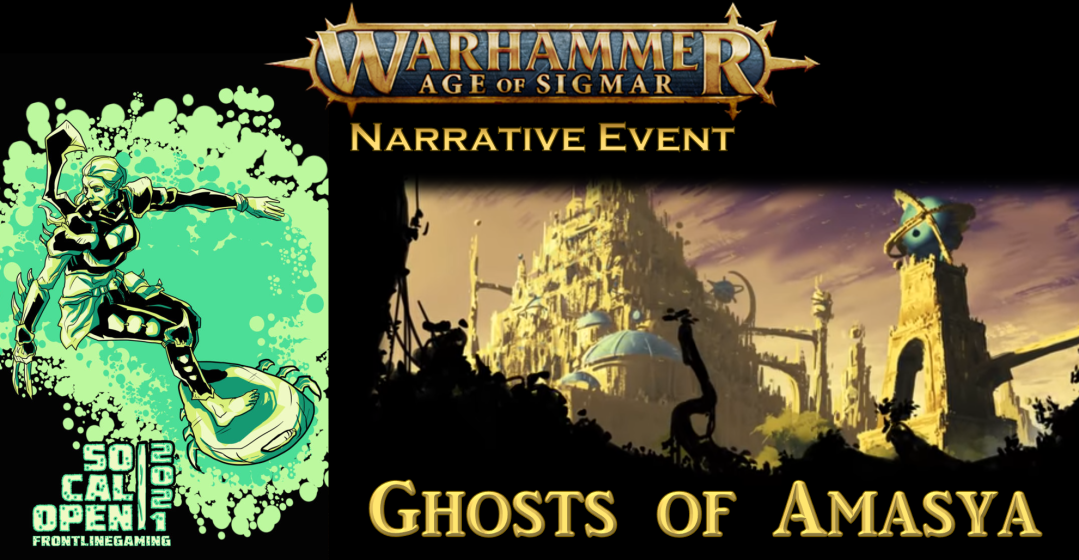 This narrative event will be part of the Weekender global event from Animosity Campaigns, where players from all over the world can contribute to how the story unfolds. It will be a war for the ruined holy city of Amasya in Ghyran, believed lost for centuries in the Age of Chaos… with the Hammerhal Reclamation claiming one side of the city… and the hordes of Da Maw dat Walkz the other.

Now, at the SoCal Open, players will be able to experience the battlefields and drama between the two warring factions first hand!

We chatted with the lead NEO for the event, Narongsak ‘Naro’ Hewitt, about what players can expect from this event.
During the past year, Naro and fellow conspirator Anthony Croupe have powered up an entire narrative Age of Sigmar scene in Las Vegas USA, and made us all jealous. Now Naro will be introducing AoS narrative play to the SoCal Open for the first time.

Q: Please summarize the event for us, and what players can expect.

A: This is an amazing opportunity to hang up our competitive hats then relax and pick up our narrative thinking caps!
Using a slightly altered version of the Conquest of Generals Battle-pack from the core book, players will be able to choose from two coalitions and battle using 1000 point armies (preferred). If players agree they can alternatively play 1500 or 2000 point battles instead.

Q: What Narrative innovations and special rules will you be deploying in this event? We know you have a love of random events that throw players for a loop.

A: We are introducing some amazing things such as Coalition pins/buttons to represent artifacts of power for players to level up throughout the event, these can be tracked in real time by pinning a star or something similar to the coalition pin (Still a work in progress). 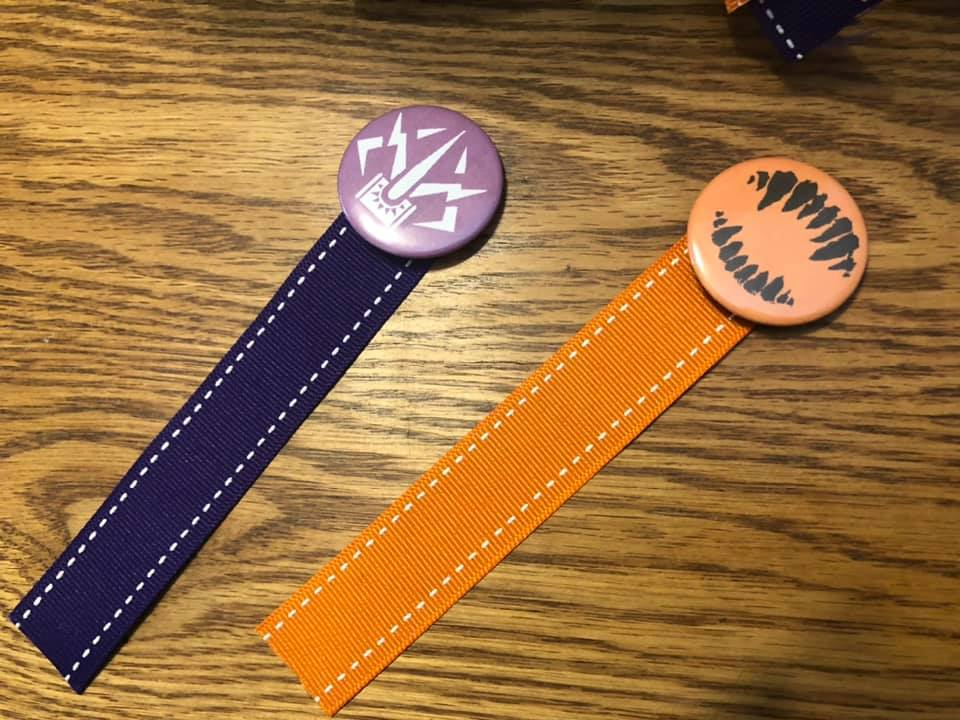 During battles, players can expect weather conditions and also in the middle of games there will be random narrative events  that will either hinder or help armies. I am a huge fan of creating player vs environment scenarios, much like a Dungeon Master that enjoys the occasional player kill (I joke!!! I joke!!! Well… sort of…)!

After a battle, players are encouraged to pick a narrative path for their coalition in which votes are counted and will affect future battles.

Narrative Paths are one of the core mechanics of Animosity Campaigns, where players in each Coalition will be able to choose from a number of different narrative choices to focus on to advance their objectives. The number of games played towards each Path, compared to those the enemy coalition has allocated, will determine the success of that choice.

Q: This event will contribute to the grand story being written globally for the war in Amasya as part of the Animosity Campaign, and players will fight for one of two teams. How will this play out in the event itself?

A: Players are highly encouraged to arrive during registration hours. During that time, part of registration is to pick a coalition to fight for. Spots for coalitions are first come first serve with a goal of an even population for matches. I have not made a decision yet but I am considering early registration, this does come with challenges in the event of no-shows but this option is not off the table yet (Work in progress).
During the event we will pair players randomly to fight another player from an opposing coalition.  If a situation arises in which there is an uneven number of players then we will match three players together to battle using the Triumph and Treachery rules from the core book.

Q: What kind of team dynamics and strategic actions will players be able to experience during the event? Will there be betrayals and backstabbing?

A: Due to the length of the event and limited time for advanced story development, ideas such as betrayals and backstabbing will be limited. I am considering a few scenarios but as of today I am leaning against this.
As far as team dynamics, I plan to encourage coalition players to reach out to one another and communicate, especially when it comes time for players to cast their votes for narrative paths.  Similar to other events hosted by Animosity Campaigns, Discord is probably the best use case but I am considering a few alternatives.  I am very curious and excited to see how things unfold as players develop a means to unite and make decisions.

Q: With this event, you have taken a part of Animosity Campaigns’ ongoing lore, then fleshing it out and interpreting it with special rules and cool scenery on the table. You have done this before with the Broken Realms books, for your local group. Explain us a bit of your process on how to do it.

For BR:Morathi, BR:Teclis: and BR:Be’Lakor (BR: Kragnos is happening in OCT) I found that I needed to rewrite many of the battleplans to accommodate matched play missions, this was my way of getting my local meta of tournament players interested in narrative play (AND IT WORKED!).  I created a Facebook chat for my players and everyday I would summarize missions and important events from the BR books leading up to a local meetup.  I rewarded narrative stories and narrative battle reports with in game boons.

To keep players connected, in the know, and to attract more players passing by inside the local friendly gaming store I created a science fair tri-fold and would post battle plans, narrative rules, and interesting announcements for players and guests to reference as needed. 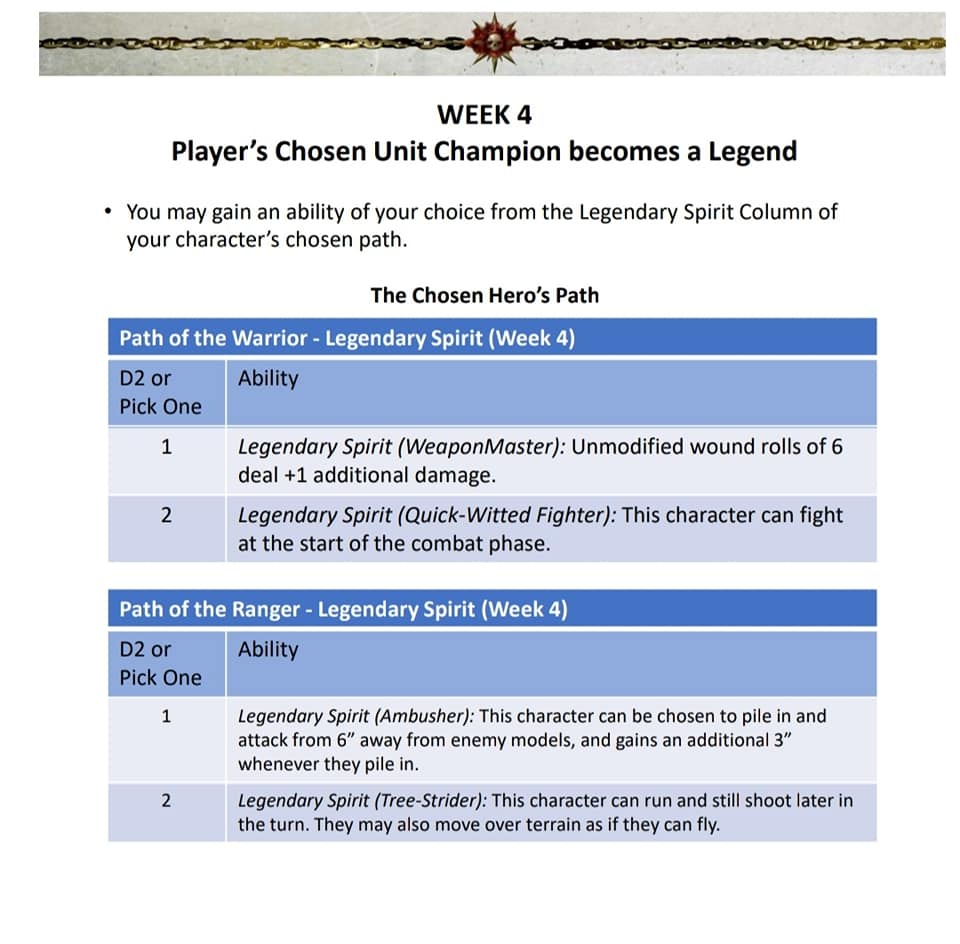 I used this same method for Animosity IIII with much success and was able to grow the AOS narrative player base within my own store from 4 players to 20+ players in no time at all. I eventually reached out to other AOS community leaders such as Anthony Croupe within my city to spread the narrative play experiences and now his store within my city has its own pool of 20+ narrative players excited about Age of Sigmar.
Selectively picking partners with vision (not necessarily your friends as first choice) and constantly updating and engaging your player base is key. Keep your players involved and reward their efforts.  Age of Sigmar narrative play is strong in my city!!!

Q: What would you like to say to players out there, to motivate them to come to the SoCal Open for the Animosity Weekender, or join you all in future Narrative Events in Las Vegas?

A: Hobby hard my friends!!! If you are interested in a welcoming environment of amazing narrative players that help and support one another within the hobby then the Animosity Weekender at the SoCal Open 2021 is for you! If you are ever traveling near the Las Vegas area and happen to have your army packed in your travel bag then reach out, maybe someone might just be running a narrative one shot event! Just as Planned!

This sounds awesome, Naro! Thank you.
We will be following the event online, so please post lots of pictures on social media!

You can find the Event Rules pack here, for more details.
You can also get in touch with Naro and Anthony at the Las Vegas AoS Facebook group!

There are still tickets available, grab yours before it’s too late!!!
And if it’s too late, sign up for the waitlist: there are always dropouts! (true story)
What do you think about this event?
Do you have any questions for the NEOs, and how they put together such a big group of narrative players?
Leave your comments below!