Event Review: Path to Glory at Warhammer World – ‘Conquest of the Savage Lands’

Narrative events are at an all-time high this year!
You can check our Twitter and scroll down for pictures and commentary of all that’s been happening in the last two months in the meantime, but we will be reviewing the events here so you can catch up on all of it!

More than 50 players descended on Nottingham with their themed armies, Anvil of Apotheosis characters, and even cosplayed as their character! They formed into teams to conquer territory and to advance their armies on the Path to Glory for two whole days of gaming!

Not your ordinary Games Workshop event. The level of planning, detail and fun that's been put into the Warhammer World Path To Glory Campaign Weekend is off the chart #ageofsigmar pic.twitter.com/2kiLfj138L

Players fought over a region of Thondia called the Drench, which was represented by a full hex campaign map, beautifully detailed.

The event featured the full Path to Glory rules (casualties, veteran abilities and extra artefacts), so players had to manage the attrition of battle throughout the whole weekend.

Players also were able to improve the warscroll of their Warlord as the event went on, including taking an Anvil of Apotheosis Hero from the Thondia book!
This was of course a great opportunity for players to create their own custom kitbashed Heroes.

Here is some of what participants had to say:

The AoS Path to Glory event at Warhammer World this weekend was fab. Huge congrats to @Stevewren @tinracersteve @PhilDodd12 and everyone else who pulled out all the stops. Team Destruction came so close to victory! pic.twitter.com/uohpZPC6aF

Really excellent game 4 vs. @jes_bickham and his family of Ogors.

It was a highlight of an excellent weekend. #WHWSavageLands pic.twitter.com/CabFfEzNxu

First #PathToGlory game with my SBGL. Was great fun! AOS does work at this smaller size and non-matched okay has lots of cool stuff to play with in the PTG campaign bits. #WarhammerCommunity pic.twitter.com/cmCKASDpZt

What a weekend, I played 5 great games, picked up a best army nomination and had an amazing time from start to finish.

Had a great time on Friday night #aos #pathtoglory at Warhammer world. Following a raucous night of feasting on a pipsqueak settlement the Big Heel and Little Heel fall out and after a drunken fight and wander off on their seperate ways leaving the Stomp to fend for itself… pic.twitter.com/HyVoTmRnmX

Fantastic Friday evening at Warhammer World with more that 30 players for the early bird Path to Glory event. Played three fab games vs these great guys @WarhammerGC @spruesandbrews @CharlesKhorne I even had to kill Niblt 😞 #PathtoGlory #SonsofBehemat #WarhammerCommunity #AoS pic.twitter.com/9wmFNxSqQR

Each Alliance was spearheaded by a team captain (also represented on the battlefield in some armies), and team strategy meetings were held to decide which objectives and territories each player would attempt to achieve.

Narrative player and NEO Ricki Smith was one of the attendants, and he has written up a great article about the event on his own website KITBASHED.

Ricki brought his own Sylvaneth from the Cirsian Isles, with the event’s story contributing to the development of his own army’s tale.

Ricki: This is my favourite event I have attended to date, the team having done an excellent job of adapting Path to Glory, a system designed for solo narrative progression, to an event and team format with minimal hiccups along the way and tying in a great narrative tale to it.
The team mechanics, army growth and glory accumulation were executed gracefully and the factional leads and events team kept everyone gripped together throughout the weekend without (to my observation) anyone let by the wayside.

Ricki: […] each Grand Alliance faction received a blank artefact going into the Saturday morning, something their narrative leads had dug up from the dirt of the Drench and recognised as being a vital treasure if only they could unlock it. […]
Here’s some of the realmstone cards that were being used, this was one of Order’s attempts to open our artefact. About 8 or 9 realmstones were in play (including varanite and warpstone).

Ricki: The folders from the WHW PTG weekender are properly nice. Missions and lore were added throughout the weekend. Cool artefacts earnt to use in future ptg games. […]
As each mission was fought, new mission sheets and lore sheets were added to our Event Pack, never knowing the mission more than one ahead allowed us to grow into the story and enjoy its twists and turns, and the physical copies of the lore meant we could read them at our own leisure.
The team also instituted narrative music and soundbites for the pre-amble to the games where narrators would update us on the grander story at play over the weekend.

Ricki: The Primary focus of the weekend was the fight to control the Drench and access a hidden vault at its heart, this was done through two mechanics: 1) Crack the code for the Artefact and 2) Control tiles on the Campaign Map.

Players who won awards also got to take home beautiful custom “amberbone claws”, among other things.

Players were sharing their exploits online as the event went on: building on their armies’ story, frantically trying to conquer territory and collect pieces of the artefact, and generally bonding as acolytes of their respective team leader.

Reinforcements arrived to save Oddfellow and Xenalta finally perished to the dragon skull. It was woth luck that Karatys was nearby to capture her soul as she fell. Although he too took the full force of the gargants they saw no use for the small soul vials left behind… pic.twitter.com/nPTfrIWSMn

So, after three games so far it’s become a little hectic. Three of the four teams found the code for the artefact, but the Order team lost theirs so are still guessing. The teams have also found some Warpstone which could be a powerful tool. Death have started to dominate the map pic.twitter.com/eiQdv5jw0n

WHW PTG is a BLAST so far@Stevewren, then events team and the 4 commanders are really giving their all with the resounding waaghs and the adulant cries of chaotic cultists echoing across the room a real testament to the joy.

Game 1 against @CharlesKhorne – bit of flavour for our random rolled mission! #WarhammerCommunity pic.twitter.com/RmacS44UFG

There were secret instructions handed to the teams, cartographers who would communicate their team’s control of map tiles to the NEOs (Narrative Event Organizers), and in some missions players could use a unit in their army as a messenger which, if kept alive, would gather more information to their team at the end of their game.

There were even Alliance-specific special units! 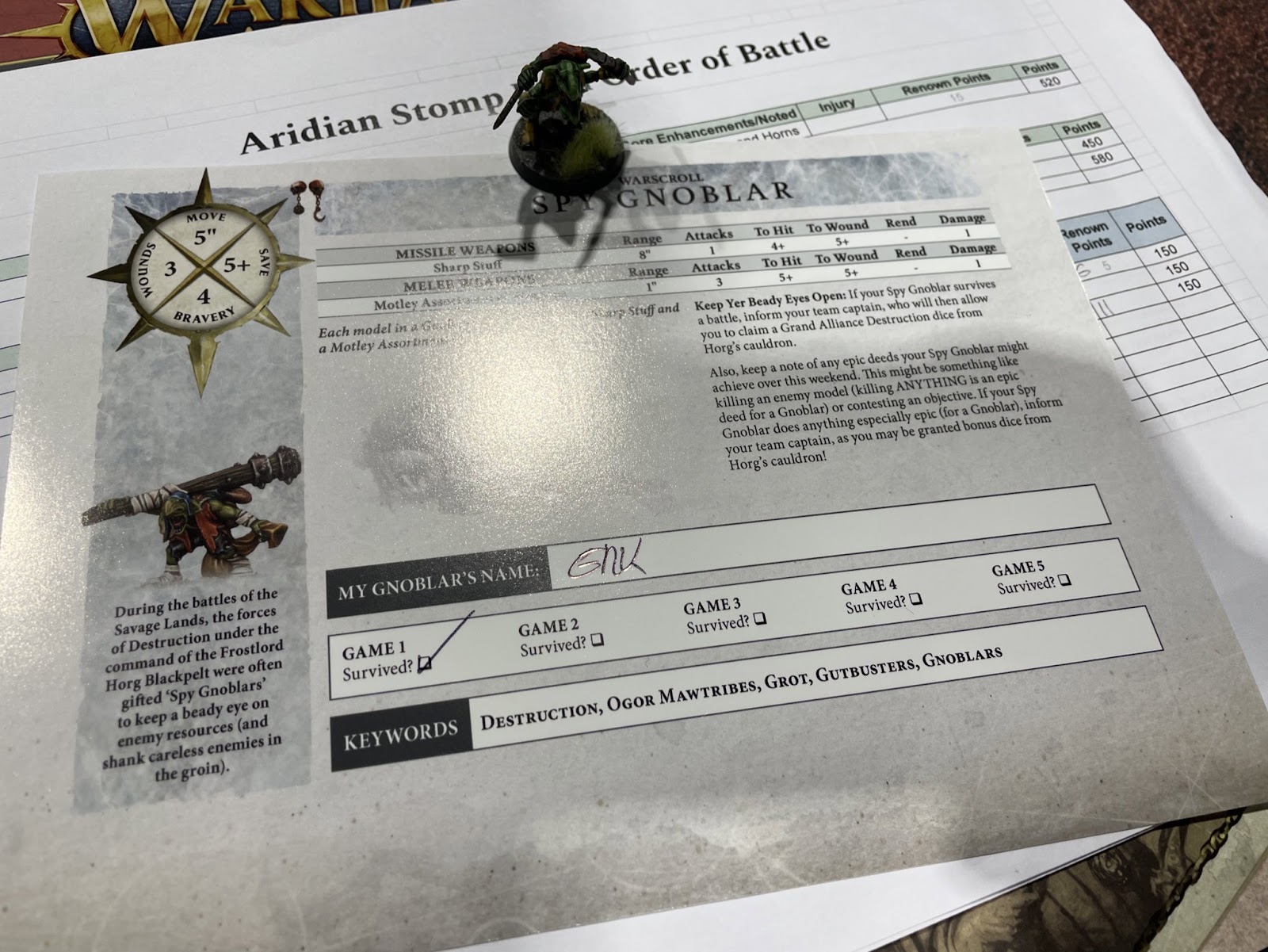 Ricki: For me this is the sort of event where I find Age of Sigmar to be at its best, players tied together in common story and narrative joy.[…] My best advice coming into this event is to know why your forces are there, but keep your goals suitably flexible to fit in with a team play environment where decisions are made as a group.

You can find the full review of the event, and more details of the mechanics, on Ricki’s website.

You can also find the Sprues and Brues podcast’s review of the event here.

Judging by the players’ feedback, it seemed to have been everything one could want from a narrative event and more!

It also seems to be a great framework for how to run other Path to Glory events, and we hope to see more NEOs taking up the ideas set forth here and applying them in their own even ts and campaigns.
You can find the pre-event Players’ Rules Pack for ‘Conquest of the Savage Lands’ below.

What do you think about this event?
Leave your comments below!