Two narrative events will take place at Adepticon in Chicago, on the 25th of March, both Age of Sigmar and Warcry, in just a couple of weeks. There is narrative for everyone!

The illustrious folks from The Mortal Realms podcast network have been hard at work, and will bring their beautifully crafted terrain, expertise with narrative play and Age of Sigmar lore to bear at Adepticon once more.
The AoS narrative event, ‘The Gibbering Dome’, has been running for several years now, and this year will count on integrating Path to Glory while players explore once more the ancient repository of knowledge in the Void.
The Warcry narrative event, ‘In the Shadow of Mallus’, will be running for the first time, and will take place in Excelsis, after the siege of the city.  The warbands will have branching quests around their goals in Excelsis.  There are faction-based branching quests, and even a “mercenary” choice.

We chatted with the lead NEOs for the AoS and Warcry events, Paul Wagner (@Pjschard) and Josh Arrington (@jearrington), respectively, about what players can expect from it.

The Gibbering Dome (Age of Sigmar) 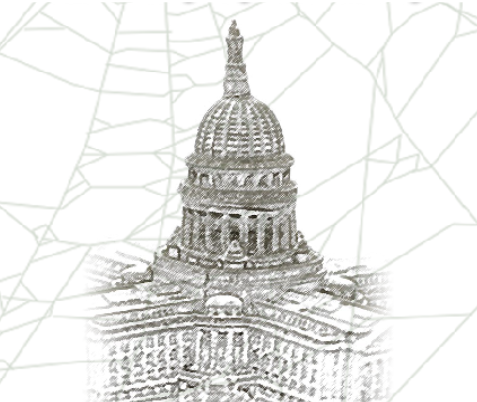 “The Age of Sigmar has brought civilization once more to the realms, and with it rumors of what was once called VoidSkein. Anchored between Agshy and Chamon by Realmgate tethers and constructed within a domed building of colossal size, it was immune to the magical flux of the realms. It quickly gained fame as the center of knowledge and culture. Throughout the Age of Chaos, it survived only in legend — the city within a building where all things were known.
The few reliable sources now talk of preserved Aex Libris cultists with stone spikes piercing the eyes. They speak of unfettered souls, stalking the ceiling and shrieking in madness. Those who have now seen it call it by another name: The Gibbering Dome.”

Paul is one of the co-hosts of The Mortal Realms podcast as well as the Path to Story podcast, and a veteran of Warhammer narrative gaming. He will be running this event jointly with Will Simpson (@SevvirElon), his co-host in Path to Story (and who himself has been running the worldwide campaign The Hungering Steppe).

Q: Please summarize the event for us, and what players can expect.
A: The Dome is a lost-but-now-found ancient site of learning, spinning through the Void between the Realms. A fledgling Dawnbringer Crusade outpost is struggling to survive within the Dome and players will interact in its fate, for good or for ill.

As players gather they will find themselves at odds with another specific player in the event as their rival. Rivals will be decided on the day of. Players will collaboratively create a narrative that will lead to an epic confrontation at the end of their tale. The day is structured as a narrative-based three-game event with each player bringing their narrative and their Path to Glory force.

Q: Explain a bit how the Path to Glory rules will integrate into your event.
A: We are using the Path to Glory template for selecting armies (1000 point Order of Battle) and are adding some custom advancement tracks as well.  Essentially making a supplement for use in an event setting.

Q: How will players’ progression with their armies, and interaction across battles, craft a story within the scope of the event? I believe there will be a rivalry mechanic from the get-go, right?
A: The Rivals mechanic will provide a goal and a villian for each player to craft their narrative around as the day progresses.  Their advancement within the supplement will augment their ability to meet their Rival as well as affect the story advancement for the event as a whole.

Q: The pillars and arches of your Gibbering Dome terrain have become a well-known sight, and I imagine they will be returning for this year as well. Will there be any new pieces or special tables players can expect to play on this year?
A:  We will be using the terrain once again but adding GW specific terrain as well.  Since several narrative advancements have included bespoke terrain produced by GW, these will be present and help to tell the story we’ve curated.

You can find more juicy details about this year’s “Gibbering Dome” event in the interview Lord Paddington from Frontline Gaming did with Paul and Will.

You can find more about the background of the Gibbering Dome, fallen Voidskein, in Doug 2+Tough‘s feature video below:

In the Shadow of Mallus (Warcry) 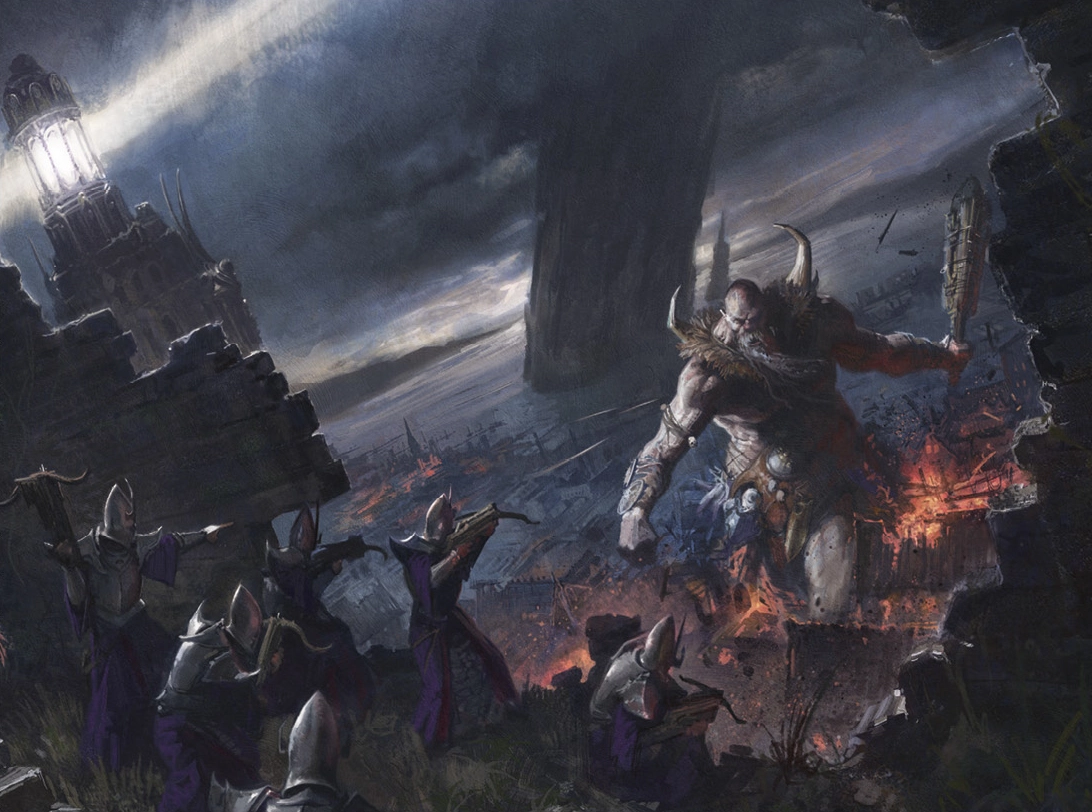 Excelsis, the City of Secrets, a corpse of prophecies and rubble.  Skaven, hedonites of Slaanesh, and Kragnos, with his horde of gargants, orruks, and grots have brought the city to its knees.  It stands, or rather, it slouches, but it is still controlled by Sigmar and those who favor Order.  Mallus stands majestic, tall against the skyline and brooding over Excelsis.  Forever weeping its prophecies, tantalizing with its glimpses of the future.  Is that why you are here?  Do you seek to steal the city’s secrets for your own?  Do you wish to pick the bones of its carcass clean?  Perhaps you are filled with noble purpose and wish to help rebuild this bastion of civilization in an untamed land?  Some of you may wish to tarnish or snuff out this jewel of Sigmar. Or is it treasure and knowledge you seek?  Whatever your purpose here, you’ll find danger and glory in equal measure, in the shadow of Mallus.

Josh is one of the co-hosts of the Dogs of Warcry podcast, and has explored the ins and outs of the extra rules that each Tome of Champions packs each year. He also owns an amazing terrain collection for Warcry, which will be a delight to play on. Joining Josh in running the event will be Vint Quamme, a very active member of the community and Warhammer store manager in the Madison area.

Q: Please summarize the event for us, and what players can expect.
A: The event will consist of 3-4 games as the players’ warbands arrive in Excelsis and choose a branching quest to illustrate their purpose in the broken city.  Each faction has a branching queset, and there is a “mercenary” option for those who don’t want to stay faction-specific. Players will have 1000 pt games, but models which die during the event cannot be replaced.  Adepticon is providing the terrain, but we hope to have some fun narrative Twists to use, based on what players choose to do along their branching quests.  Additionally, we are introducing Legacy Artifacts, which will be flavorful major artifacts that players can bring to any future Dogs of Warcry event and are gained at the end of their quest.  We will also have a variety of fun prizes to celebrate certain achievements, such as “best painted”, which will be chosen by the players.

Q: Warcry has just seen a few recent updates, both with the Varanite Delve battleplans as well as the addition of Bladeborn fighters in  new Tome of Champions 2021. Players are quite excited. Will they be able to try these out at the event? And can they bring a monster in their warband, or capture one on the day?
A:  We will definitely be using the updated points and allow warbands (including Bladeborn) from Tome of Champions 2021.  We are not allowing allies, thralls, or monsters in this first event, as we really want a fairly even slate which limits competitive warband building.  We may have monsters in the event, only time will tell.  We will also explore these other unique warband options in future events!

Q: Will the event include Quests of its own, or will players be able to continue Quests they are already on, if they use an existing warband?
A: As the event is a stand-alone campaign, players will choose from 2 branching quests -faction or the Dogs of War(cry) questlines.  Players will get to choose which paths they take along their quest and their choices will ultimately affect which Legacy Artifact they get at the end of the event.

Q: Your terrain boards are always amazing, do you have any new ones you will be showcasing in this event for the first time?
A:  Thank you!  Adepticon is providing all the terrain for this event, but I certainly have many ideas for boards, which I would love to do for future events.  As participating in the Adepticon 2022 event was an unexpected surprise for us, we didn’t have lots of time to plan and prepare.  However, we can certainly plan ahead for next year now that the convention has started up again.

Q: What would you both like to say to players out there, to motivate them to join these narrative events at Adepticon? And perhaps even join you for narrative play over there in Wisconsin?
A: We are obviously big fans of narrative play and love creating stories with people.  Whether it is trying out new mechanics, boards, missions, we are interested in it all.  I’ll also share one of the main statements in the narrative pack, which we included in our first event, The Plunging Spires:

“Be gamesome: You will get out of this event what you put into it. We want to create a space where everyone is welcome to celebrate all aspects of this hobby; gaming, painting, converting and narrative. We may all be outside our comfort zones. Be the best human you can be and be generous in enhancing the group’s fun.  So we highly encourage people to come out, have fun, and help each other create awesome stories for their warbands.”

Also, come hang out in The Mortal Realms Discord to talk more Age of Sigmar lore details and juicy secrets! We have a lot of narrative gamers hanging out in there and many are happy to roll some dice and play some games.

Thank you, Paul and Josh!
We will be following the event online, so please share your players’ submissions on social media with us!
You can find the Adepticon tickets page here for more details.
(There may not be many tickets left, but get on that waitlist because you might still be able to get in at the last minute!!)

What do you think about this event?
Do you have any questions for the NEOs, and how to engage with a convention to run big events like this?
Leave your comments below!